Some remotely sensed imagery such as Landsat images are very well suited to identifying land-use and land-cover (LULC) types on medium scales. In our project we are also using 4-band AEROKATS TwinCam imagery to identify local LULC types at much finer spatial resolutions. Through the use of supervised or unsupervised classification methods in image processing software, it is possible to break up images into discrete classes that can then be quantified and subjected to statistical analysis.

In healthy green vegetation, chloroplasts in the outer palisade mesophyll layer of the leaves contain the pigment chlorophyll. Chlorophyll pigment controls the plant's absorption of visible light. This absorption is particularly high in the blue (around 0.4 - 0.5µm) and red (0.6 - 0.7µm) portions of the spectrum. The red and blue wavelengths are converted by the chloroplasts into food for the plant. Green light (~ 0.5 - 0.6µm) has a lower absorption rate (therefore higher reflectance), resulting in the overall green appearance of healthy plants. Reflectance percentage (or albedo) in the red and blue wavelengths is generally well below 5%, with green around 10%.

A very different thing happens to the light in the near-infrared (NIR) portion of the spectrum, (~0.7 - 1.1µm). These longer waves penetrate deep into the leaf, and are reflected by the cellular structure of the spongey mesophyll near the back wall of the leaf. Reflectance (or albedo) ranges around 50-60% in the NIR. 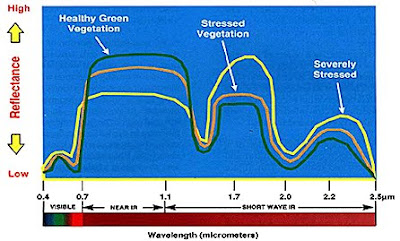 If plants become stressed and leaves begin to desiccate less visible light is absorbed to make food and less near-infrared radiation is reflected. Therefore the ratio of reflectance in the visible versus reflectance in the NIR ranges begins to change.

A simple ratio (SR) can be used to describe this:

Because red acts as a good proxy for the visible portion of the spectrum as a whole we can use it to rewrite the simple ratio:

To compensate for shadows and variations in slope in some terrains, and to avoid extreme numeric ranges in the result, another index was developed - the Normalized Difference Vegetation Index (NDVI). Here the difference between the NIR and VIS reflectance is divided (or normalized) by the total reflectance in those ranges:

This ratio is calculated on every pixel in the image using the red and NIR bands. The result of this calculation is always a value between -1 and +1. The closer the value is to +1, the more likely the target pixel is healthy photosynthetically active vegetation. The closer it is to 0 or -1, the less likely it is to be healthy vegetation.

NDVI is useful for calculating biomass and primary production. It is also useful for monitoring green-up and green-down, as well as changes in the occurrence times of each over different years. NDVI is employed in monitoring drought and desertification as well.